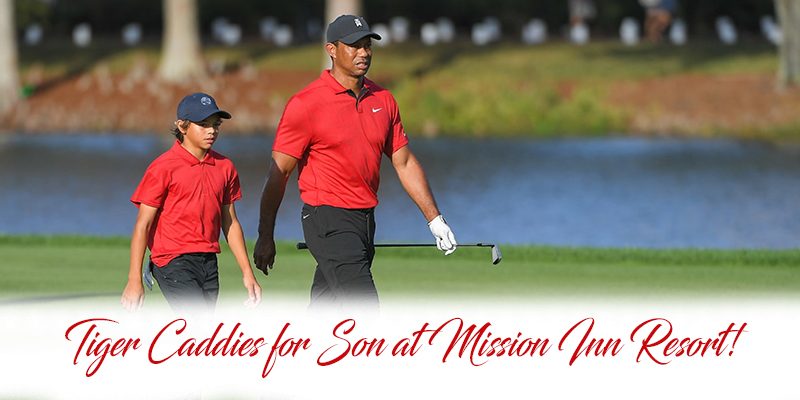 Golf aficionados have watched through the years as Tiger Woods won 15 major championships. During the last weekend in September, Woods was wearing a different hat as he caddied for his 13-year-old son, Charlie, at Mission Inn Resort during a 36-hole qualifier for the Notah Begay III Junior Golf National Championship!

Charlie shot a career-low 4 under par 68 on Sunday to tie for fourth place in his 12- to 13-year-old age division. Charlie shot an 80 on Saturday, then came back and got an eagle, four birdies, and two bogeys to climb the leaderboard in Round 2 with dad Tiger at his side as caddie.

The highlight came on the 14th hole of El Campeón, a par 5, when Charlie lipped out his approach shot and then tapped in for an easy eagle.

“I knew it was going to be close,” Charlie told Golf Digest magazine. “But not that close.”

Charlie credited his famous father with keeping him calm in key moments. “Dad told me to stay patient and just play steady golf,” Charlie told Golf Digest. “I couldn’t have done it without him. Some shots, I would’ve been so off. He steered me on the right course.”

Charlie finished 11 off the lead in his age division and will not advance to the national championship event next month in Louisiana.

Misha Golod won the combined boys competition, shooting 73-71 for an even-par 144 total. The 15-year-old made news in March when he and his mother left war-torn Ukraine on a long journey that brought them to Orlando. Golf Digest detailed his story and how the golf industry came together to bring Misha to the United States to pursue a golf career.