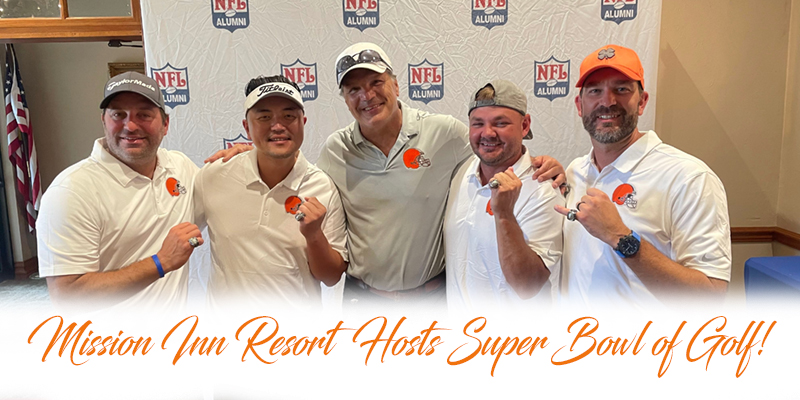 Former Cleveland Browns linebacker Frank Stams led the Cleveland Chapter team to victory in the Oct. 23 tournament. Twenty-seven teams first competed in a scramble format on Mission Inn’s two championship courses, El Campeón and Las Colinas, and the two low teams on each course advanced to a Shoot-Out. The Tampa Chapter and the Pacific Northwest Chapter teams were eliminated after bogeys on the first Shoot-Out hole. Stams and his teammates then held off the South Florida Chapter team to win the Super Bowl in a dramatic way.

Using a borrowed wedge because his clubs ended up in a different city when he flew to Orlando, Stams lofted a 50-yard pitch shot on the 18th hole of El Campeón, the second hole of the Shoot-Out. The ball rolled toward the cup, lipped out, and stopped 2 feet away. Moments later, teammate Justin Sopko tapped in the putt to secure the victory and set off a raucous celebration.

“I had so much fun playing with this great group of guys, and everyone contributed today to make it such a special experience,” said Stams, who had led teammates Sopko, Sheng Lu, Chad Trush, and Ryan Workman to victory in the Cleveland Chapter championship to advance to the Super Bowl of Golf.

Stams knows something about winning titles: He was an All-American defensive end on the undefeated 1988 Notre Dame team that went on to win the national college football championship.

Other notable NFL figures also played in the event at Mission Inn, including Jim Caldwell, who coached the Indianapolis Colts to the Super Bowl in February 2010. Beasley Reece, who played for the Dallas Cowboys, New York Giants, and Tampa Bay Buccaneers from 1976-84, led his team from the Northern California Chapter to victory in the 2020 championship and defended that title at Mission Inn.

Reece also serves as CEO of NFL Alumni, the oldest, most well-known and respected retired player organization in professional sports. The non-profit lists a primary mission as “Caring for Our Own” to help players in their post-NFL lives. It offers alumni medical, business, and legal services to help keep former players and their families healthy, productive, and connected to the league and former teammates.

“The NFL Alumni Super Bowl of Golf is the highest-profile event for our association, and we’re especially proud that proceeds benefit the NFL Player Care foundation and other fine charities that mean so much to us,” Reece said. “Mission Inn proved to be a spectacular venue for our national championship and to have it come down to such a dramatic shot as the one Frank hit today capped off a memorable time at a very special place.”