Of 124 teams, nine regional champions played to qualify to play in the State Championship which took place on March 27th and March 28th the 2018 Men’s Interclub Team Championship and was hosted here at Mission Inn. 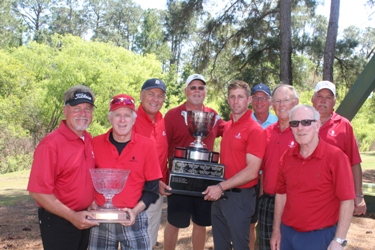 The participating teams from each region were:

The Battle for State Champion

For two days, in beautiful conditions, the nine regional champions played for the title of State Champion.

The second day was a much more difficult day for all the teams involved. However, Houston Hill, Larry Glock, Terry Dinsmore, Randy Chaney, Dan Dowdall, Herm Arnold, Joe Lewandowski and Doug Herron of Mission Inn Team were able to take their large lead from the day before all the way to the win. Mission Inn , finished with 391 points and with an eight point lead over Tiger Point Golf & Country Club who placed second, and 10 points over the third place winners, River Strand Golf & Country Club, who scored 381 points.